Lead armies in the Second Crusade

The real life Queen consort of France, then England and Duchess of Aquitaine in her own right who was mother to ten children, among them King Richard and Prince John. Her status as the Duchess of Aquitaine, member of the Ramnulfids House and marriages meant she was one of the most wealthy and influential women in Western Europe during the High Middle Ages.

While the Queen in the surviving ballads was named Katherine and married to a King Henry -making her either Catherine de Valois or Katherine of Aragon- Eleanor was the Queen contemporary to King Richard who was involved in English politics during his reign and Howard Pyle's use of her in when he included an adaptation of the ballad "Robin Hood and Queen Katherine" in his novel was taken up by later writers who wanted to keep things less anachronistic while maintaining Robin's connection to King Richard. The inclusion of Eleanor in the Robin Hood mythos also allows writers to include a colorful historical figure who was already very much legendary long before her own death.

She appears as The Good Queen Eleanor, mother to King Richard and Prince John. In some tales she is noticeably absent in places where she ought to be as she was ruling as regent while Richard was fighting in the Crusades.

Elanor survived all but two of her children, Prince John and Queen Eleanor of Castile. She was buried in France at Fontevraud Abbey after her death in 1204. 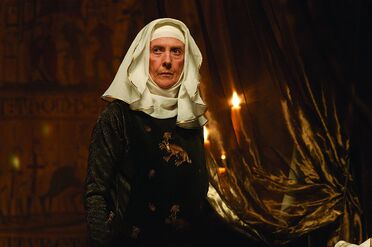 Eileen Atkins as Eleanor of Aquitaine in Robin Hood (2010) 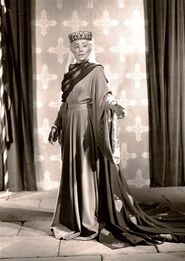