Glaive (from back when the word could still mean sword)

Sir Roger, called Red Roger in later ballads, appears as the ally of the Prioress of Kirklees who aids her in the murder of Robin Hood and in some version pays her to kill her weakened cousin.

Despite the fact that she was head of a nunnery she the treacherous Prioress of Kirklees is considered to have taken Sir Roger for her lover before he became her co-conspirator in Robin's death due to these lines:

"For the love of a knyght,
Syr Roger of Donkester,
that was her owne special"

Red Roger is one of Robin's most dangerous and unexpected foes as he is among the very small number of them Robin had never robbed or otherwise encountered prior to his very successful attack on the rogue.

Several historic individuals have been proposed as possibly being or being the inspiration for the Robin Hood vilian.

Other possible candidates include a Roger de Doncaster who was the keeper of the priory at Lenton from 1267-1270. 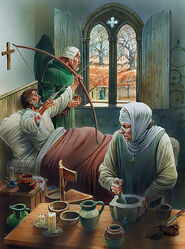 Illustration of The Death of Robin Hood by Peter Dennis from Robin Hood (Myths and Legends) (January 21, 2014) by Neil Smith